Once considered outside the city of London, Greenwich is home to a host of sights including the National Maritime Museum and a regal former Royal residence. Greenwich is where eastern and western hemispheres meet and where you will discover breathtaking views, lovely markets and amazing attractions, all in a beautiful riverside setting just minutes from central London.

Greenwich is amazing! It’s home to a World Heritage Site, The O2 arena, London’s prettiest royal park and the Prime Meridian of the World – longitude zero. Wander through Greenwich Park to the Royal Observatory and the Planetarium, or fly 90m high on the Emirates Air Line cable car into a world class show at The O2 arena. Browse designer-maker arts and crafts in Greenwich Market, and visit Cutty Sark, the fastest ship of her age. Below are the must sees in this tiny part of London that will make your visit all the more memorable.

First up is Cutty Sark, located right outside of the exit of Greenwich’s easily accessible DLR station. Climb aboard the world’s last surviving tea clipper, which was built at the end of the golden age of sail. Discover what life was like aboard the 19th-century ship, find out how she brought tea from China, and walk beneath the hull that made her one of the fastest ships of her time. 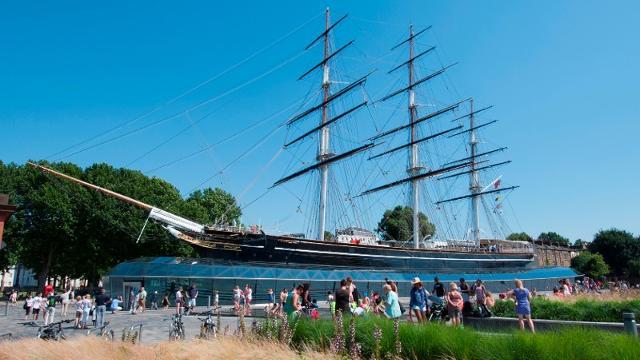 After The Cutty Sark, The Queens House is only a short walk away and will take you on a similar journey back in time. Designed by the pioneering  architect Inigo Jones, the Queen’s House is a masterpiece of 17th-century architecture. Conceived as a ‘House of Delight’ for James I’s Queen, this exquisite former royal residence is set in the leafy surroundings of Greenwich Park with spectacular views of the River Thames and the contrasting skyscrapers of Canary Wharf beyond. For more interesting Royal history be sure to check out London Top Sights Royalty tour.

The Peter Harrison Planetarium at the Royal Observatory is London’s only planetarium.

Combining real images from spacecraft and telescopes with advanced CGI, the Planetarium can fly you into the heart of the Sun, transport you to distant galaxies, show you the birth of a star or land you on Mars!

There are different shows every day plus special shows for kids and some have live commentary from real-life Royal Observatory astronomers.

Located beyond the Queens house is the vast Greenwich Park. Overlooking the River Thames it is home to one of London’s most iconic views, as well as an amazing mix of 17th century landscape, stunning gardens and a rich history that dates back to Roman times. The park’s 183 acres has something for everyone. At the park you can stand on the Prime Meridian, the reference point for the rest of the world, and visit The Royal Observatory which is managed as part of the National Maritime Museum and contains the Astronomy Centre, Flamsteed House and the Meridian Courtyard as well as the Peter Harrison Planetarium, London’s only planetarium.

Charles II established the Royal Observatory in Greenwich Park in 1675 to study the stars and improve navigation at sea.

You can see the clocks John Harrison developed to solve the problem of longitude here and stand astride the dividing point between east and west – the Meridian line. There’s lots more to see as well, including a 4.5 billion year old meteorite, the Great Equatorial Telescope and Greenwich Time Ball, which drops every day at 1.00pm. Plus, you can now get married at the Royal Observatory. Say ‘I do’ in this world-famous location with the bride in one hemisphere and the groom in the other!

While you can easily spend a whole day in the park with all of its activities, be sure to head back down to the village in time to take in some of Greenwich’s world famous markets.

There has been a market in Greenwich ever since the 14th century. The market originally specialised in the sale of livestock, meat, fish, eggs and poultry,and changed through time to crafts and street food. The old stables and slaughterhouses can still be seen in today’s new market. 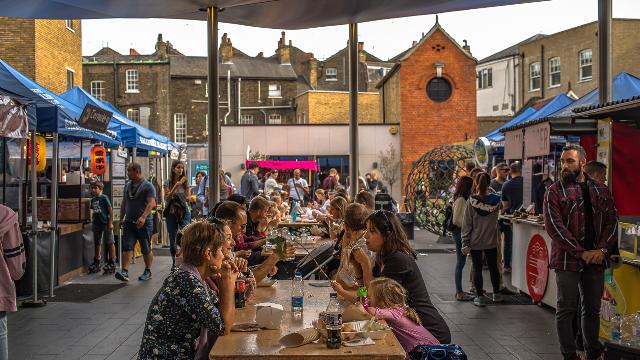 The market is located in an area where artisan crafts reign. There are also many stalls selling food from all over the world, and you can purchase homemade souvenirs, such as scented candles and jewellery.

Greenwich Market  as we know it has been around since the early 1800s. Like many other London markets, the Victorians made this one a much more permanent institution by covering it with a fantastic wrought-iron structure in 1845. Since then the market has gone from strength to strength, with the roof protecting you from the elements (making it a firm favourite with Christmas shoppers!). From wood-turners to blacksmiths and jewellers to quilters, this is the place to see designers and craftspeople actually at work on pieces. Surrounding the stalls are shop units where you can buy everything from modern art to superb shoes and at the entrance to the market you can’t fail to be enticed in with the aromas of street food. Based in the heart of Royal Greenwich, just a stones throw from the Thames, and surrounded by pubs, restaurants and boutiques, this is a must-visit destination for anyone hunting for that perfect gift

Greenwich Market is home to carefully chosen designer-makers, artists, antiques dealers, beauticians and delicious food from all around the world. It’s recently been refurbished and polished up with a new roof and extra space for food lovers. Up the road is Clocktower Market which has over 50 stalls with a fascinating range of collectables and vintage, including military memorabilia, antiques, art, badges, books, ceramics, vintage clothing, crafts, furniture, jewelry and records. You definitely won’t leave empty-handed!