Pretend you’re in Amsterdam (with slightly less laidback cyclists) and mooch around London’s six-mile ‘canal square’ London’s canal system is a marvel of industrial engineering. Over 200 years old, it no longer acts as a commercial artery into the heart of London from the countryside, but instead has become a network of thoroughly pleasant waterside paths. And submerged shopping trolleys. But still very pleasant. 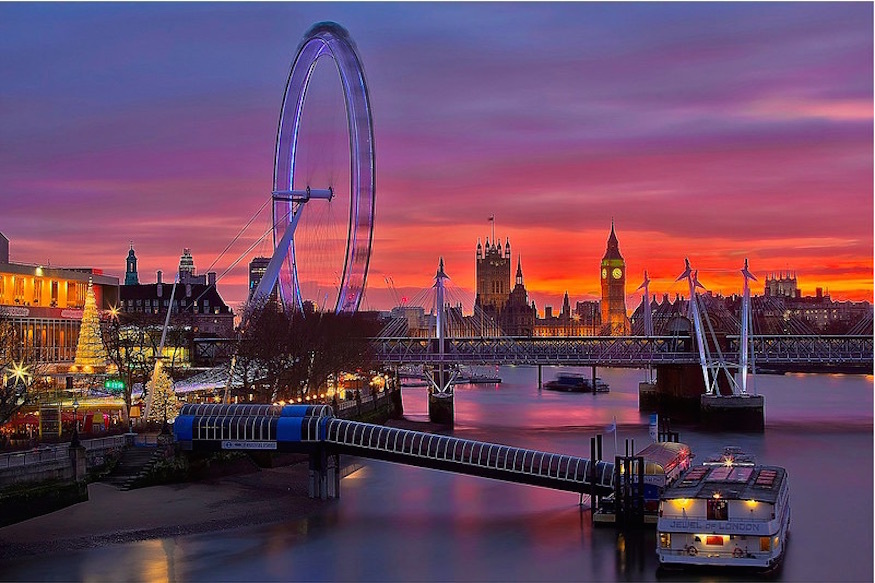 The City Visitor Trail takes you on a journey through the heart of London. Take in famous attractions such as St. Paul’s Cathedral,Guildhall, theBank of England and theTower of Londonor try the themed “side-tracks”, each one moving away from the main path to give a more in-depth look at one part of the city.

There’s something magical about South Bank at sunset; it could be the Victorian lamp-posts glowing above the Thames, the dramatic architecture of Westminster lit up from below, or the views of Tower Bridge. The concrete block that is the National Theatre becomes a colourful beacon of culture, and dark cranes on the skyline fade into the silhouetted cityscape. When night falls, the South Bank quietens down, the attractions close, and it becomes a place to appreciate the beauty of the city without the throb of commuters and tourists. And in the rain? Well, that’s the time to appreciate the most recognisable sights of the UK capital in their most natural state.

One of the four Inns of Court between Temple and Blackfriars, the three-acre garden is open to the public on weekdays. It has been developing as a garden since the 14th century, before which it was a mere orchard. You can still see the remains of the garden’s history: the ancient orchard, the 18th-century iron gates and the Queen Anne sundial. The garden is a home to many British birds – robins, thrushes and tits – bees, and several varieties of butterfly. But its largest patrons are the flowers: tulips, poppies, geraniums, dahlias and snowdrops, to name but a few. It really is a thoroughly British garden, a ‘haven of tranquility’, and bushes practically burst forth in bloom.  The paths are tree-lined and peaceful, purple-bordered by bluebells when they appear in spring. The manicured lawns are lovely for a sit-down picnic, and many of the paths are lined with benches to allow quiet contemplation and an appreciation of your idyllic surroundings.

With freedom on your mind, head to the wide open green spaces. The London Parks and Gardens Trust provides a wealth of knowledge for the intrepid walker to discover. One of the highlights to explore is Postman’s Park. Just around the corner from St Paul’s Cathedral, it used to be popular with workers from the nearby Post Office and thus derived its name. Have a look at the 1899 memorial shelter by G.F Watts commemorating the heroic deeds of ordinary people who died saving others.

In contrast to the finely trimmed gardens of London’s palaces, the enormous Hampstead Heath nature reserve offers a wild, untamed walking experience with great views across the city, which acts as a subtle reminder of where you really are. The Heath has over 30 ponds, huge bright rhododendron bushes bursting with colour, and a vast variety of wildlife. It’s one of the biggest green areas in London – over 791 acres of woodland and meadows. Open and breathtaking, the park offers an experience of England’s wildness within the city. The reserve is home to plenty of wildlife, too; such as the largest pipistrelle bat roost in London, muntjac deer, terrapins and slow worms.

A gift from the city of Kyoto to celebrate the long-standing friendship between Japan and Great Britain, the Kyoto garden is a wonderful respite from the London madness. With tiered waterfalls, ponds of carp, cherry blossoms and set against the semi-woodland backdrop of Holland Park, it’s a fantastic spot to enjoy a moment to yourself.

Built in the late 1770s, Morden Hall used to be a country estate, bequeathed to the National Trust in 1941. The River Wandle meanders through the 125-acre park, and is home to feathered friends such as cormorants and herons, along with around 100 other species of birds. Rarities include Redwings, Little Egrets and Firecrests. It’s an ideal spot for bird watching, and also features over 2,000 roses.

Little Venice is an area of secluded beauty full of colourful narrowboats and the site where the Grand Union and Regent’s Canals meet. Begin the walk along the picturesque footpaths of Little Venice and head towards Regents Park, following the Regent’s Canal towpath. Wander through the outer circle of Regent’s Park, heading towards the ZSL London Zoo. If you have the time, it’s just a further 15 minute walk to Camden where there’s an array of eclectic street food to enjoy at Camden Market.

Extending from the Thames Barrier to the river’s source in the Cotswolds, The Thames Path would take some time to conquer in its entirety, but there are plenty of manageable sections. The six miles from Albert Bridge to Tower Bridge takes in the Tower of London, the Houses of Parliament, St Paul’s Cathedral, the Tate Modern and Shakespeare’s Globe, for example, while the five miles from Tower Bridge to Greenwich includes a variety of sights from Canary Wharf to the Cutty Sark.

Celebrating the Queen’s Diamond Jubilee, this path for walkers and cyclists links the Olympic and Paralympic Games venues, including the O2 Arena, Greenwich Park and the Serpentine. The route is divided into five sections of varying lengths. Why not try all or part of the City Loop which starts and ends outside No.1 Poultry, and takes in the city sights of St Paul’s Cathedral, the Museum of London, The Barbican, Guildhall Art Gallery and Girdlers’ Hall.

St James’s can boast of being the oldest Royal Park in London and its close proximity to Westminster, St James’s Palace and Buckingham Palace. It’s a great place to engage with British wildlife that has become accustomed to human presence (squirrels will eat from your hand if you’re patient enough), and of course see the park’s most famous residents: the pelicans. It’s not the quietest of walks– St James’s Park is one of the busier, touristy places – but it’s still worth it. The views of the iconic fountain welcome you into the park, as do gigantic weeping willows – it’s hard to believe it was once a muddy swamp.