15 Beautiful Beaches Near London For A Seaside Day Trip

Looking for a sunny getaway, but can’t afford the flight? Here is a list of the best beaches in and around London for all your summer needs!

Frensham Great Pond, south of Farnham and, if traffic is kind, you can be there from much of west London in less than an hour.

Its beautiful sandy beach, formed by the sandy soil of Frensham Common, draws day trippers who flock there when the weather warms up.

It has two swimming areas in its lake, marked by white buoys, with a maximum depth of 1.4 metres in one and 1.2 metres in the other.

there’s also a brilliant and bizarre sculpture park with 600 statues to explore within walking distance.

Whitstable is a seaside town on the north coast of Kent in south-east England, 5 miles north of Canterbury and 2 miles west of Herne Bay Top it off with fresh seafood, and you’ve got a picture perfect day out.

Sometimes all you crave is a bit of space and the simple sounds of the ocean. Climping Beach is quieter than its neighbours of Littlehampton and Bognor Regis, which makes it the ideal spot to clear your mind and enjoy quality time with the family.

Appromixately 2 hours from London (train from Victoria to Littlehampton).

Wander along the second longest pier in England, climb the Naze Tower, or hire one of their luridly colourful beach huts. In a seaside town brimming with history, a day out here is the perfect chance to make some memories.

Approximately 1.5 hours from London (train from Liverpool Street to Walton-on-the-Naze).

Sunny Sands Beach is a hugely popular sandy beach at the eastern end of the Stade and Folkestone Harbour. It is a firm favourite with families throughout the summer, with good facilities nearby including toilets and cafés, pubs and beach shops.

As beaches go, you won’t find bigger than this one. Bournemouth Beach is a whopping eleven miles long, so it’s easy enough to escape the crowds here. Amongst golden sands of spots like Sandbanks, you’ll also find shops, gardens, hotels, and restaurants.

Approximately 2 hours from London (train direct from Waterloo to Bournemouth).

Offering wonderful views of Chichester Harbour and the South Downs beyond, the natural and unspoilt sandy beach of West Wittering has been a favourite destination for a family day out for generations.  The highest water quality and excellent facilities have made it one of the premier Blue Flag beaches in the country. The extensive acres of neatly mown grass close to the beach are perfect for parking, and picnics.  The sea is popular with wind and kite surfers, while shallow lagoons are left on extensive sandy flats at low tide. The whole area is internationally recognised for its wildlife, birds and unique beauty.

Approximately 1.5 hours from London (train from Victoria to Chichester).

When the tide is out, Botany bay is a great location for fossil hunting and exploring rock pools. There is plenty of exposed sand to enjoy when the tide is in, but due to the bay’s shape the ends are cut off at high tide.

You’ll need to plan carefully to reach this one. Mersea Island is an island in Essex, England, in the Blackwater and Colne estuaries to the south-east of Colchester. Its name comes from the Old English word meresig, meaning “island of the pool”

Approximately 1 hour from London (train from Liverpool Street to Colchester). 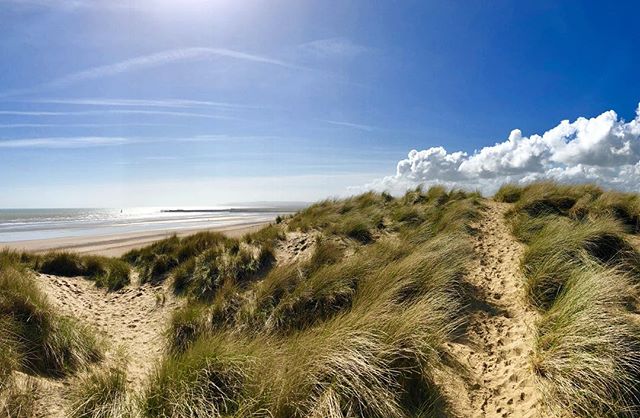 Approximately 1 hour from London (train from St Pancras to Rye).Camber Sands is a little unusual for a Sussex beach and the reason is in the name. Yes, sands! Unlike most beaches along the Sussex coast which are lined with pebbles and shingle held in place by a series of groynes, Camber Sands is covered in fine, golden sand. Not only that but Camber is home to the only sand dunes in East Sussex.

Approximately 1 hour from London (train from St Pancras to Rye).

Minnis Bay is a safe and secluded sandy bay with separate areas for swimming and watersports. Plenty of facilities, including a well-equipped children’s area. Coastal cycle and walking routes are clearly marked at the entrance to the beach. Popular for windsurfing and kite surfing. Served by an open-top bus in summer.

Escape to the English countryside and explore Beachy Head in East Sussex. A favoured Victorian seaside retreat, you’ll find a historic pier,  sea front hotels, and a rather charming beach. It’s also not far from the utterly enchanting Beachy Head, which is as impressive a view as you’ll get on the south coast.